The marimba soloist Conrado Moya is currently one of the leading names internationally in the present day world of marimba music. He has been acclaimed for his extraordinary capacity of expression, superb technique and total commitment on stage.

Born in Alicante in 1989, he began his career as a performer under the aegis of the soloists Sisco Aparici in Valencia and Katarzyna Myćka in Stuttgart, while completing his academic training at the “Hanns Eisler” Hochschule für Musik in Berlin under the guidance of Rainer Seegers and Franz Schindlbeck (percussionists of the Berlin Philharmonic) and the percussion soloist Li Biao.

At present, Conrado Moya is increasingly active as a marimba soloist all over the world, collaborating regularly with symphony orchestras and bands throughout Europe as well as participating in festivals such as the Frankfurt Musikmesse, PASIC in Indianapolis and the International Mercedes-Benz Music Festival in Shanghai.

He also plays in ensembles such as Li Biao Percussion Group and Marimba Quartet together with Katarzyna Myćka, Franz Bach and Filip Mercep. He has performed in some of the major concert halls all over the world, including the Teatro Monumental in Madrid, the Stuttgart Liederhalle, the Teatro Colón in Buenos Aires and the National Center for the Performing Arts in Beijing.

Because of his firm commitment to the diffusion and development of his instrument, Conrado Moya frequently collaborates with other marimba players and musicians of other instruments. In the same way, he often works together with well-known composers such as Anna Ignatowicz-Glińska and Eric Sammut, as well as with up-and-coming composers for marimba such as Arkadiusz Kątny and Ferran Cruixent. A result of this type of cooperation was Silentium, his first marimba solo album.

Conrado Moya complements his artistic career with extensive educational work. He is regularly invited to participate as a teacher in Master Classes as well as in music academies such as IKMMA (Katarzyna Myćka International Marimba Academy) in Luxembourg and Hannover, and in IMSE (International Marimba Seminars and Events) in Nuremberg, and also on juries in international competitions.
Recognition has come with awards such as First Prize at the ConUCOpercusión International Marimba Competition, the Honorary Award of the Alicante Concert Society’s Musical Interpretation Contest, and the Musical Interpretation Scholarship awarded by the Amadeo L. Sala Pro-Music Association, which have mentioned his outstanding quality as a musician and his work and commitment to the future of his instrument.
Conrado Moya is endorsed by the American marimba maker marimba one®. 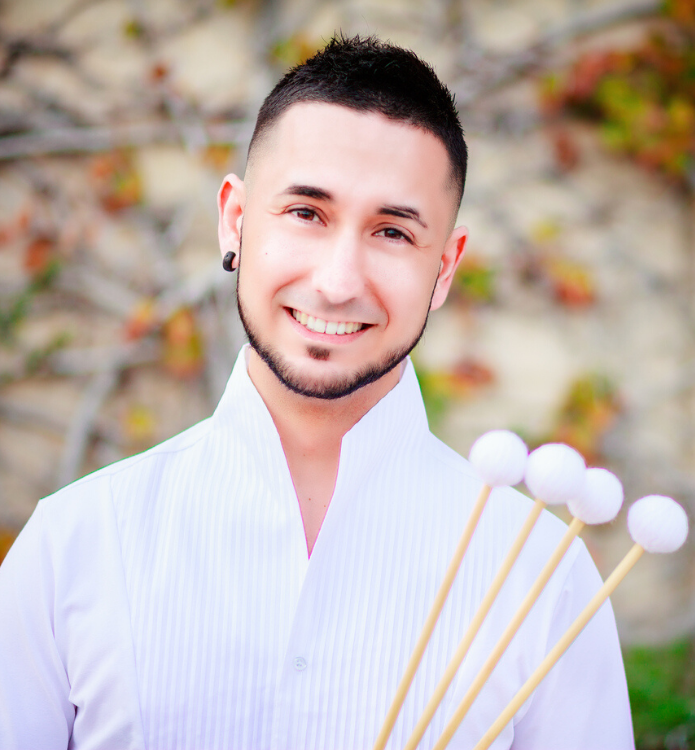 This is the world premiere of “El Jardín de Baco”, an attractive concert for marimba and orchestra written by Lorenzo Palomo that can be heard on February 17 and 18 in Badajoz and Cáceres by the Orquesta de Extremadura conducted by Salvador Vazquez. The composer describes his work as follows: Great party in the garden of the god Bacchus, who has fun surrounded by his nymphs. Everything is beautiful, cheerful, jovial, fascinating. The marimba and the orchestra have equally fun intertwining melodies and rhythms in a climate of sensual pleasure and ecstasy.

END_OF_DOCUMENT_TOKEN_TO_BE_REPLACED

Conrado Moya, the marimba in its purest form