The Soprano Elena de la Merced studied Singing at the Conservatorio Superior de Música in Valencia with Felisa Navarro and Ana Luisa Chova, where graduated as well in Guitar. She furthered her singing studies with G. Suozay, M. Zanetti, E. Obraztsova, H. Lazarska, W. Rieger, D. Baldwin, and Ross Craigmile. In 1995 she was awarded at the J. Argall International Singing Competition, and in 1998 she won the Viñas Competition.

She took part in the Bergen Festival (Austria) two consecutive years, interpreting the Oscar role at Un ballo in maschera by Verdi under the baton of Marcello Viotti, and was greatly applauded. In 2002 she was invited to the festival again to play Musetta at La Bohème by Puccini, which she later interpreted as well at the Washington Opera House.

She debuted at the Teatro alla Scala in Milan as Carolina from Luisa Fernanda by Federico Moreno-Torroba with Plácido Domingo, taking part as well at the Washington, Madrid and Los Angeles performances.

She sung Oriana in Amadigi by Händel in Salamanca and Montpellier with the baroque Al Ayre Español Orchestra, under the conduction of Eduardo López-Banzo, and recorded it for the label Ambroisie-Naïve. 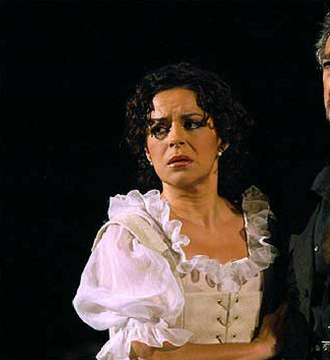